A taste of wilderness in the middle of the city, and a step into the wayback machine... Mission San Jose, San Antonio Texas.

Being a Texan, that is prone to heat related injury such as heat exhaustion, and heat stroke, and in order to get outdoors during the months of May through October, I either have to plan activities where I can stay in an air conditioned space, or I have to travel a very, very long distance to get to where I won't need a hospital visit. Now I am NOT going to let our high temps keep me locked to a desk, so what to do?

Well the choices are so far...
#1. Camp with an Air Conditioner in a tent (that will be covered later, but not what we did, this time, this is FAR less than ideal!).
#2. Camp in an RV with a generator, or power. Less ideal than the AC in a tent in some ways, certainly far less fuel efficient!
#3. Take trips where I can flop in an air conditioned hotel room...

Now the advantage of being a Texan is I have all of Texas to explore, and there is plenty of natural, and even man modified beauty to explore and enjoy...

With a long weekend, and tickets to see our favorite country act on Saturday night at the Alamodome, we decided to take the time to go to do some touring of the old Spanish Missions in the city of San Antonio Texas.

The drive off of the freeway to the San Antonio Missions National Historical Park is a bit odd. To get there the driver exits the freeway and enters a very colorful urban neighborhood, filled with businesses and homes painted in bright colors and some of them themselves overflowing with an abundant crop of gorgeous flowers, and other flora, passing the homes, tire shops, tacqurias, and corners stores, the view changes dramatically as you come across the biggest of the missions, Mission San Jose. The giant outer wall made of stone looks much older than its actual years, and the church structure itself could pass for a thousand year old European cathedral. 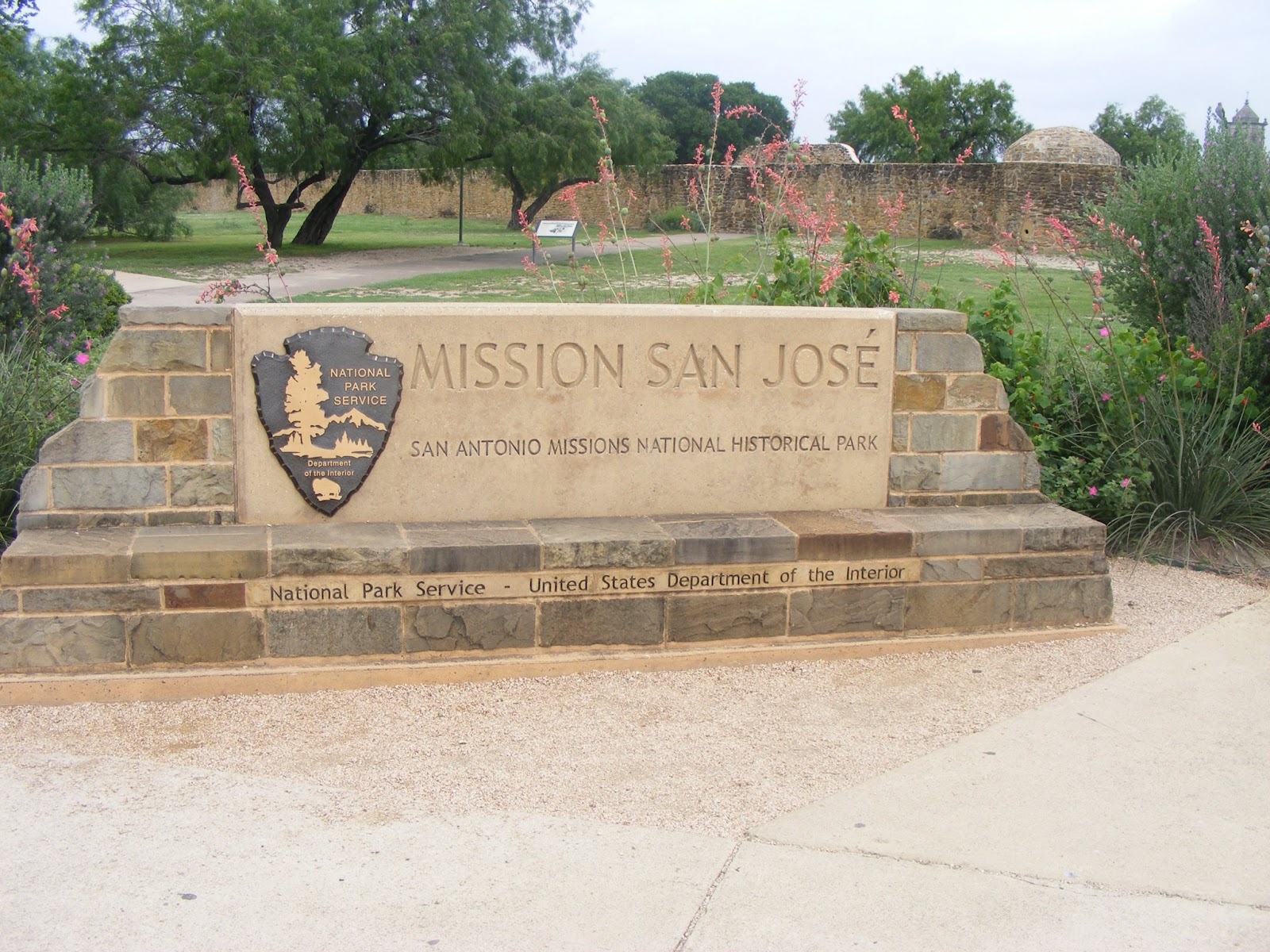 As you enter the park you are greeted with a rustic stone visitors center outfitted with a completely modern theater that shows a film on the history of the Mission itself, and the people the mission was here to serve, and of course convert to good subjects to the Spanish crown, and good Catholics. And yes the interpretation of the purpose of these missions can be debated, the film, and the guided tour both do an excellent job of even handedly presenting the pros, and the cons for the native people for the missions themselves.

The grounds are covered with native plants such as Prickly Pear Cactus, as well as an abundance of Native Pecan and Mesquite trees.  The Prickly Pear can be seen growing in all sorts of peculiar locations, including on roofs! It was somewhat charming to see the look of surprise on the faces of folks that are not from the desert southwest hear that people use cacti as food! For what it's worth, I love Nopales in my Tortas! Prickly Pear Cactus growing wild on the roof of a
utility overhang on the outer wall. 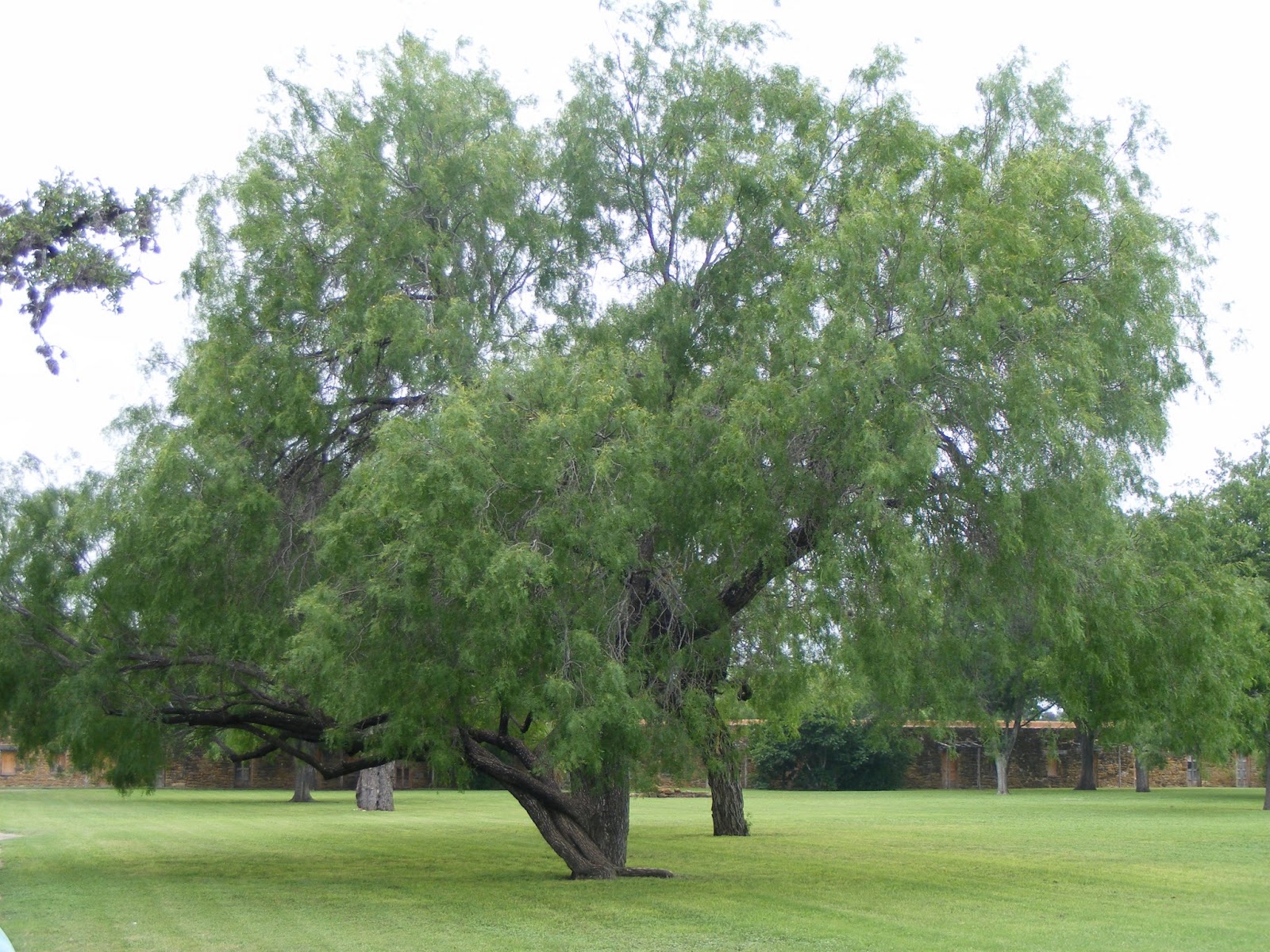 Mesquite tree in the middle of the inner court. 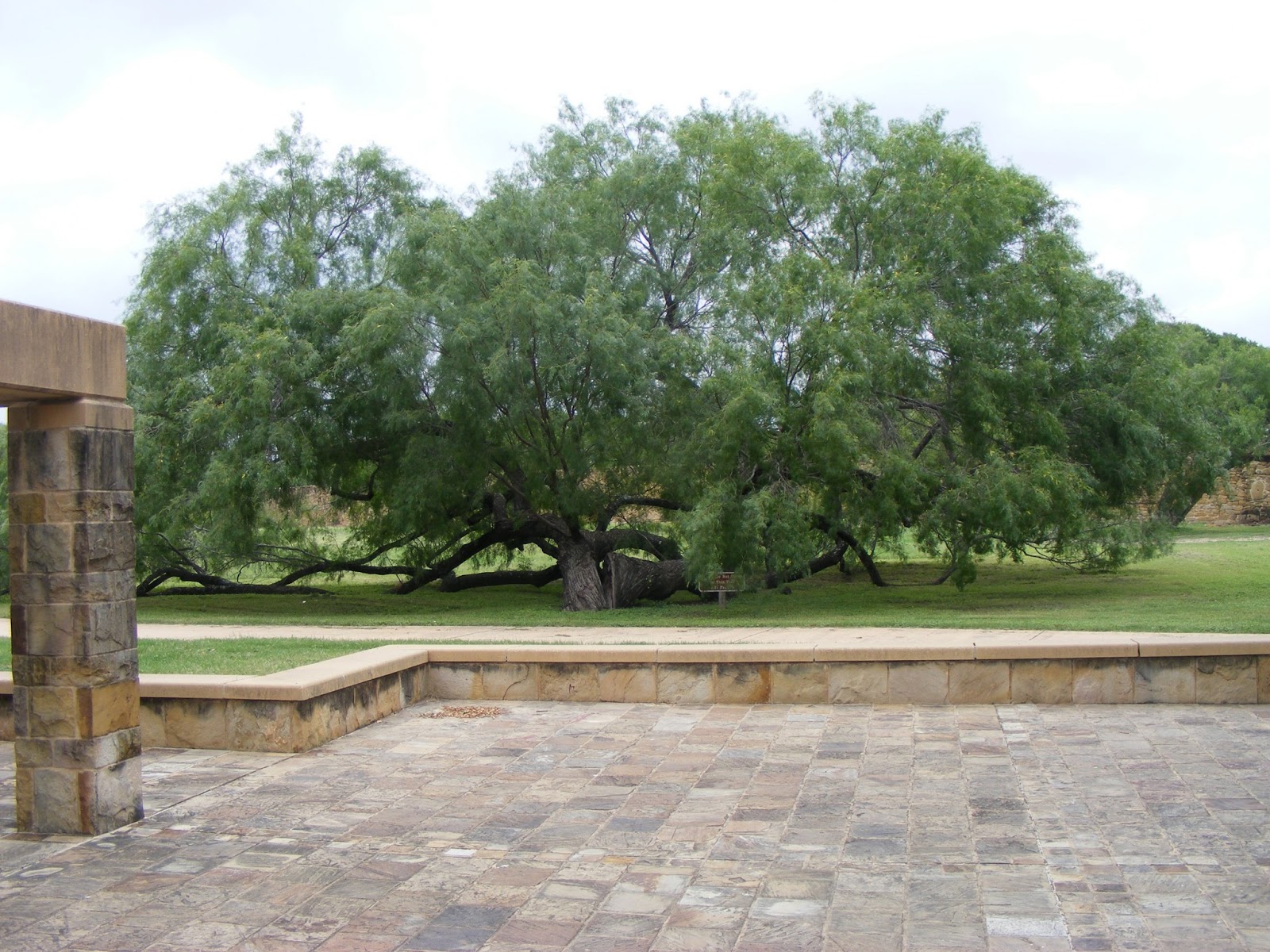 Beautiful 100+ year old mesquite tree sprawls in
graceful arcs as it spreads out.

On the grounds there are the remnants of the stone buildings that were at one time the workshops, and as you gaze through the Mesquite to the old foundation outlines, your imagination can rebuild the view to a time when the outer walls contained the workshops, the carpentry shop, the blacksmith shop, the weavers shop, you can picture the priests and clergy strolling the grounds explaining points of doctrine with the natives. The time machine of the mind certainly does get heavily used in this place!

While the church is still the original building, the outer wall / living quarters, and utility buildings are all depression era reconstruction projects that fairly accurately reproduce the original structures that were at one time on the grounds. Wind, rain, heat, and sun are all huge parts of what structures and fixtures in these old buildings have to deal with, and sometimes it is obvious when things like doors have been replaced as they haven't weathered quite thoroughly yet, which creates some beautiful changes in patina for the doors. It really is striking to view! The wood fired stone ovens in front of every few living quarters are not only intriguing to look at, they also conjure up mental images groups of families baking needed staples for the next few days, bread loaves and whatnot. It certainly had to be much more difficult to operate than say a modern gas oven! The depression era reconstructions of the wood
fired ovens in front of the living quarters ponder
how people baked with these things...

For Catholics, Protestants, persons of other faiths, including Atheists, the church building itself is a thing of beauty filled with world class artwork and iconography. The artwork is simply world class! The architecture, while sharing many common features with Catholic churches and cathedrals worldwide, is full of architecture and features that are unique to the Spanish Missions, and are things of pure beauty, worth every second to gander at. Even if the symbolism is meaningless to you, the enjoyjment of the artwork itself should be universal! View approaching the beautiful facade of the
church. 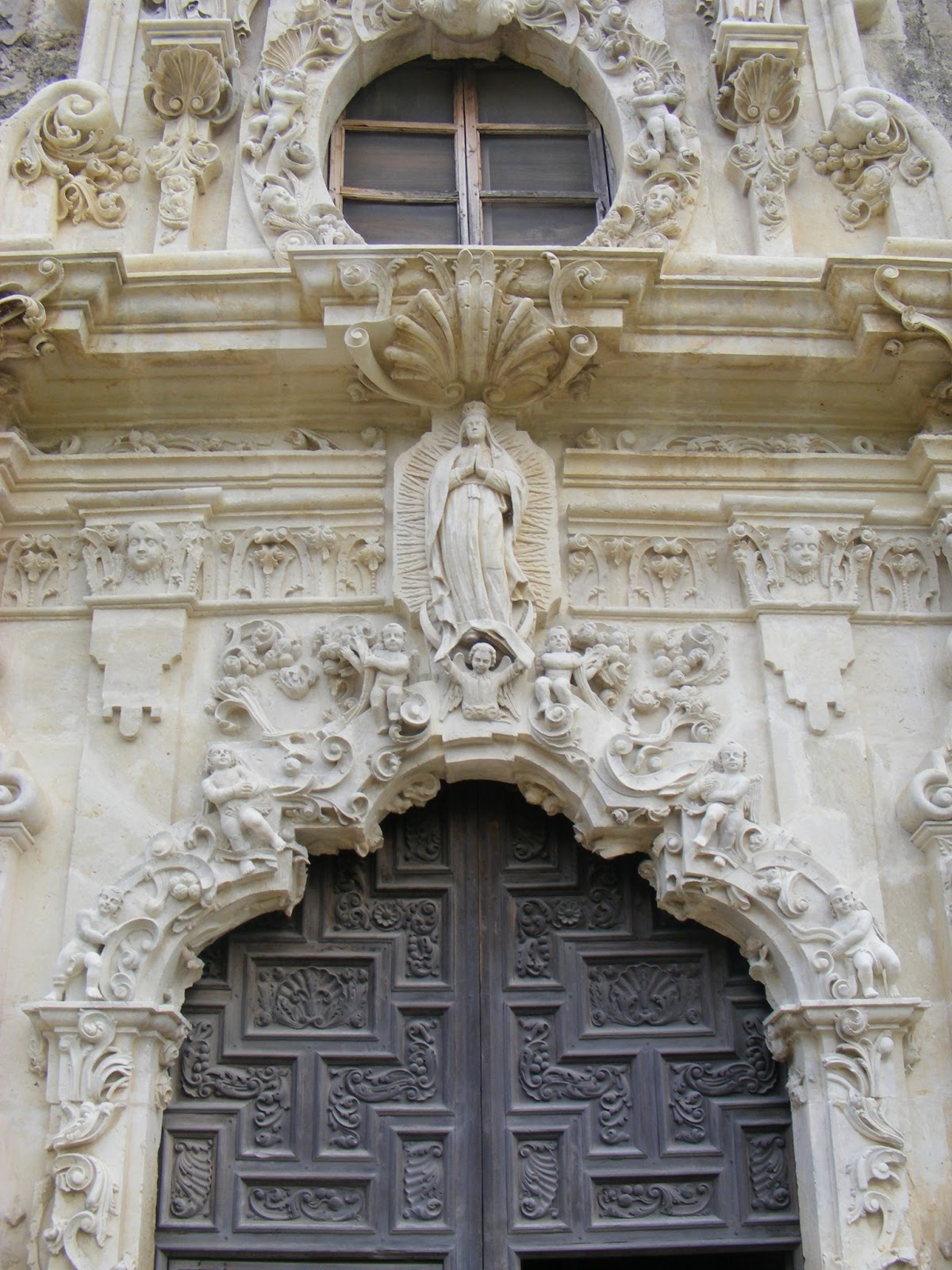 Beautiful artwork on the doors, and
the gorgeous doors themselves! The beautiful line of arches next to the serene gardens.
This is a simply stunning place to be!

Once your day is done, and the sun has gone down, maybe if you are staying in one of the fine hotels downtown, you can venture down to one of the dining or drinking establishments that have Bistro seating right on San Antonio's famouns Riverwalk, and you can enjoy a fish bowl sized margarita while watching the river boats slowly amble on by...

So even though this is an urban adventure, it is still a chance to...

Get out there, and find your own, road less traveled.